Burgee or Not Burgee - That is the Question

Burgee (brr-gee): a flag bearing the colors or emblem of a sailing club, typically triangular.  Perhaps from the French word “bourgeois,” in the sense of owner or master.  Oxford Dictionaries.
I guess I never stop creating things.  During the fall of 2017, I saw the need to design a burgee for Bishop O’Connell High School in Arlington, where my three kids were on the sailing team.  If you have a sailing team, you really do need a burgee, right?  The athletic director agreed, and financed the fabrication of the flags.  We went on and made stickers and embroidered patches in the same design.
No sooner was this done for Bishop O’Connell High School than I realized Ship 1942 was in the same position, sailing a lot but without a burgee beyond the standard swallowtail design common to all Sea Scout Ships.   A new, unique design would need to be both bold and, if possible, contain some symbolism significant to Ship 1942.
To this end, I used the square red cross of St. George in recognition of our sponsoring organization St. George’s Episcopal Church in Arlington.  A blue canton (upper corner of the flag nearest the pole) is emblazoned with the number “1942” surrounded by four stars.  This is in recognition of our selection as the National Flagship and as a member of the National Flagship Fleet.  As of this writing, we have the stickers made, the embroidered patches are on their way, and the flags themselves are almost ready for production. 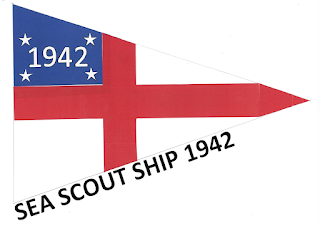 Popular posts from this blog

Welcome to the official new Sea Scout Ship 1942 blog,  Ship's Log !  We will continuously work hard to keep this blog updated with information about our most recent activities.
Read more 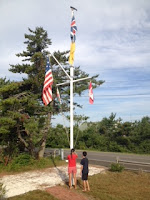 Building the “Landship” for Sea Scout Ship 1942 By Dave Leggett I built my first flagpole in 1982, 30 feet tall with a yardarm and gaff, from which I could fly my extensive collection of flags, five or six at a time.  During the winter of 2014-15, the main spar of this pole was destroyed by a storm.  When I replaced it the following summer, I got to thinking how much Ship 1942 could use such a mast for its landship, maybe not quite as tall, but as big as possible.  A landship is a symbolic version of a ship made of pieces representing a bow, a stern, masts, and a bridge, and is used during ceremonies on land.   I resolved to start with a half-scale model of my original flagpole mast.  At 15 feet, this would easily fit inside the parish hall at St. George’s Church in Arlington where our ship meets and has its ceremonies.  For easy transport, no component would be longer than 8 feet, but once assembled, it would be large and solid enough to do justice to our landship ceremonies.
Read more